I normally walk past Starbucks conspicuously in slow motion, take 5 steps back, then finally decide to enter. It’s usually a green tea latte or a white chocolate mocha (yes, they are coffee to me). Usually I go with skim milk, when I remember that is, and definitely no whipped cream. I figured 5 seconds of heaven in return for 15 minutes on the treadmill at the gym? No thanks. I have too much junk in my trunk. Or maybe whipped cream just isn’t my thing. A sprinkle of cinnamon over my coffee always gives the finishing touch. And as for skim milk (or skimmed milk as they call it in the UK and Canada), I have a funny story that goes along with that. When I was 11ish (I really can’t remember, so I’m just going with that), my mum decided to replace the full cream milk we always had with skim milk (and only skim milk) because a friend of hers who was also a mum had done so. No semi-skim milk, no low-fat milk with added calcium and vitamin D, just skim milk. As I didn’t really have enough dough to pay for the groceries at the time, I guess I just went with it. So over time, I just got used to it. Then one day in high school, I had a full glass of full cream milk, and I remember telling myself, “It’s so…creamy”. I wasn’t used to it, what can I say?

Every time they ask for my name at Starbucks, I always have this same thought, “Quick, make up a name” before automatically surrendering and giving my real name. I’ve had a few friends in the past who always give a different name. They would always say it with confidence and as if it was nothing. Their actual names were supposedly “too difficult”, so for every visit they made to Starbucks I guess they sort of created a new identity for themselves. “Hi, I’m Superman today, but normally I’m Clark Kent. Hold my glasses while I casually rip open by buttoned-up collared shirt will you.” One of them who was Indian always gave the name Raj (you know like that guy who’s scared of girls on Big Bang Theory), the other one always gave the name TJ, despite his initials being TT. I guess that would be weird if he actually said, “Call me TT.” Not that anyone says that while they are in line at Starbucks, but hey, who knows. Anything is possible.

from a 21-year old girl who likes Starbucks (except for when there’s a long wait or they don’t make it nice).

2 thoughts on “Starbucks + a weird story about skim milk” 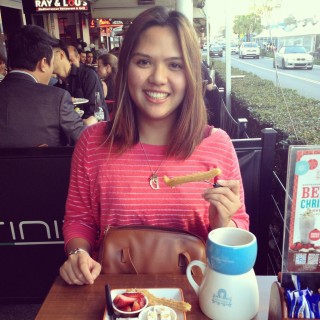